Garnet- A Gem For All Tastes

Gem cutting was my hobby for almost four years and, because of the recession, it became my profession. Now this intense interest has gone beyond occasional flights of fancy and at times, in the midst of the excitement of the gem chase, I feel like the luckiest man alive. Not only do I get to see finished gems at their finest, but I get to know them in their raw state. Rugged uncut beauties fresh from the treasure vaults of the earth, the dry smell of dust still on them, newly liberated from the dark into the bright day. I get to ponder them, and finally decide how they should be cut to bring out the best in them. Best color, best brilliance, best weight, best shape. I'm on the lookout for the finest quality at the best price.

What stone do I enjoy the most? I would have to say "garnet". It cuts like a dream, is hard and durable (6.5 to 7.5 on the Moh's scale of hardness), and has every color, including blue. I know, I can hear a great chorus saying, "I thought it only came in dark red!"

First of all, yes, for all those who like dark red stones, the perfect stone for them would be Pyrope-Almandite Garnet. Almandite (AL-man-dite) ranges from dark brownish orange to brownish red, to purplish red. Pyrope (PIE-rope) is usually blood-red, sometimes with a tinge of purple or brown. However, when these two garnet types are in combination (Pyrope-Almandite), the color is often lighter. When this garnet has a purple color to it, it's called "Rhodolite" (ROAD-o-lite). Most have some inclusions ("flaws" or other minerals), but in 1996 I cut one to a weight of 15.97 ct. that was considered flawless. A regal square brilliant gem, it was from Mozambique, and went to an American investor. 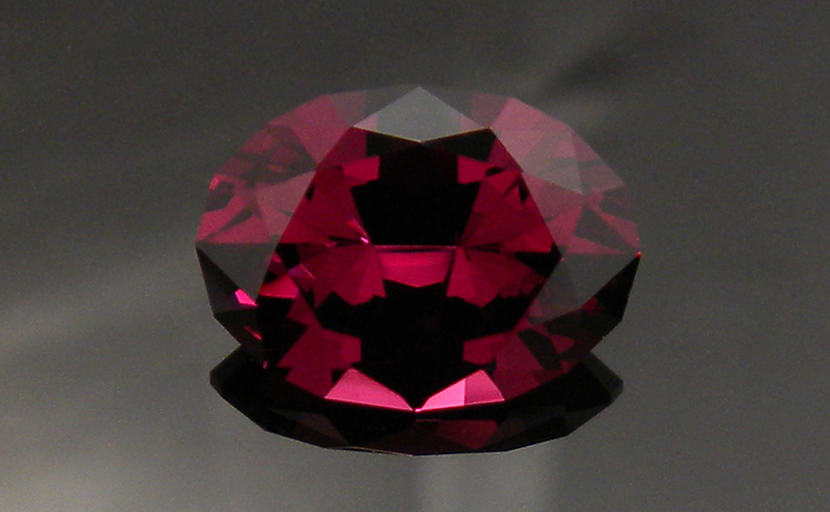 Garnet is probably the most underrated gem there is, likely due to the fact that small, dark red garnets are plentiful and very inexpensive. The trade sees tons of them coming from India, usually badly cut, making an already dark stone even darker. But a medium colored, larger, well-cut garnet in a rose color, is something to behold. I've had the privilege to cut such stones with delightful regularity. Such garnets are Rhodolite (see above). My favorite is called raspberry rhodolite.

One of my clients insisted on having a 12mm round, brilliant cut raspberry rhodolite. After three years of searching, I obtained a stone that could be cut into such a gem. Cutting it in a round brilliant variation called a "Highlight Cut", it was more beautiful than we could have imagined. The sultry velvet red reminded me of a perfect rose. I set it in a ring sized to a 13 finger. With hands that size, a 12mm stone doesn't look awkward, and it has attracted many compliments.We went on to supply him and his wife with 11 such stones of various sizes and shapes-for rings, earrings, tie tacks, and a magnificent 14kt necklace involving six rhodolites-the largest a breathtaking 14mm VS quality in a round cut of our own invention, called the "Stealth Cut".

Spessartite (SPESS-ar-tite) garnets are orange, red, brown, yellow-orange, or reddish brown. An uncommon stone, especially in large sizes. Perhaps the best spessartine on the market is called Mandarin Garnet, and came from Northern Namibia. The mine was discovered by a Dutch explorer before the turn of the century, but he died before the mine could be exploited. It was only in the last few years that the mine was rediscovered, as well as the Mandarin garnet (named for its intense orange color). I obtained one that was over eight carats in the rough for a buyer, and after cutting, took it to a GIA-qualified appraiser. It was so new on the market that there was nothing about it in his books, so he had to phone GIA headquarters to ask how to go about appraising it. The man immediately knew what he was talking about, and told him it had made a big splash at the Tucson Gem and Mineral Show. The material was considered "hot" because the color was so nice and it was so brilliant (refractive index of 1.8-higher than sapphire). He said it was better than the previous material from Ramona, California. He then gave our appraiser some advice on evaluating it, and said it would definately appraise higher in 1997. Reporting on the Intergem show in Idar-Oberstein, Germany, foreign correspondents Si and Ann Frazier said, "The new garnet should prove one of the most important gems of the 90's. Most of the cut stones at the show weighed under one carat, but fine stones in larger sizes have been reported." Of the material we have received, all that we've cut has been over one carat.

The next garnet worthy of note is one called Tsavorite (SAV-o-rite). It belongs in the Grossular (GRAW-syu-lar) species of garnet. Other colors in this species include orange (Hessonite), colorless, pale green, yellowish green, yellow, orange, and cinnamon brown. Tsavorite has been mistaken for emerald, but the color tends to be more of a vibrant grass green. If cut at the right angles, it is extremely bright. I cut one for my display that looks like an intense green diamond. Although Tsavorite generally has some inclusions ("flaws"), it is invariably much clearer than an emerald. It is rarer than emeralds, and it is cheaper. It is 7.25 on the Moh's scale of hardness, which means it is plenty hard enough for a ring. One carat and over stone are considered rare, even for Tsavorite. 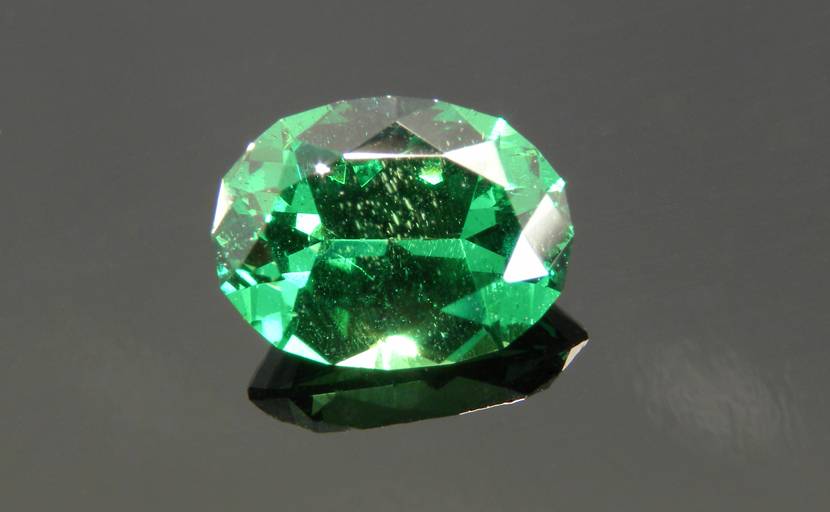 Consumer Tip: untrained salespeople might be suspicious of these gems when brought into a jewelry store for appraisal. Remember, appraising requires a reputably trained gemologist, so don't be upset by unenlightened opinions. The tale is told locally of a garnet worth thousands nearly being thrown away because of a quick glance and snap judgment---ASK TO SEE CREDENTIALS!