I did a carving of a leopard in Leopardskin Jasper back about 1991. In our travels with our gem business, the carving created a bit of a stir wherever we went. Because of it, a lady commissioned me to carve a gecko from Leopardskin Jasper. This is how it went:

The leopard required a piece without any of the occasional lines or sheets of black and tan that are characteristic in Leopardskin Jasper. The gecko carving found those features to be a big advantage. The rough piece I chose was quite flat, and had been discarded from the piece I used for the leopard. The base was already determined by the saw blade. I drew the gecko outline in permanent marker on the top of the piece and began the shaping by grinding on a 100 grit 8" diamond wheel.

This gave me the back, head, and tail contour. I now knew the piece would be about 5 inches long. After this, I had to redraw the gecko, because the image had been ground away. The shape around the figure was done with successive cuts with a diamond cut off blade and coarse diamond burrs of different shapes clamped in a # 30 Foredom hand piece with a water drip. I would repeatedly sink the blade into an area marked for removal, then take a small screwdriver and break out what was left standing, then grind it smooth. That goes pretty fast. Then, with diamond blades and burrs comes some fairly meticulous shaping around arms, toes, chin, neck, etc. Geckos and their toes have many angles, curves, nooks, and crannies.

Now, the stripes and sheets of black and gold worked out perfectly in the piece, and I can't take any credit for it. These features just happened to be in exactly the right places for me. There was a neat and perfect little black line exactly where the mouth was to be. I just incised it a little. Under the chin it was all gold, just the way one would expect in a live gecko; and on the side, just a line of gold was visible at the belly. 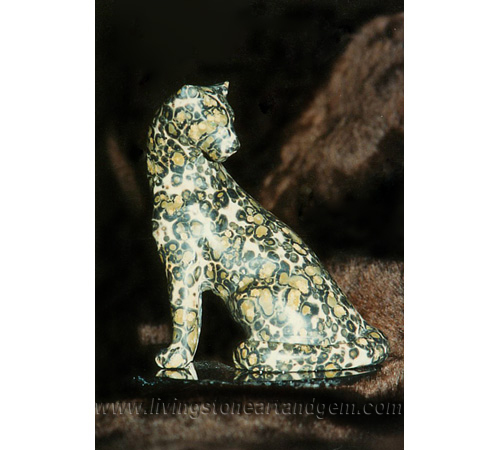 The base of the carving was rough ground enough to look like rough ground. The stone was ground down to the black sheet just to separate it that much more from the gecko, which was polished. The idea was to illustrate a creature camouflaged to its' native habitat.

The eyes were a special feature. A gecko has huge eyes, and gaping holes were ground to accommodate them. I used yellow Apatite from Durango, Mexico for the eyes. I cabbed the gems on one side, and I faceted them on the other side just using a simple 16 facets at 42 degrees reaching from girdle to point with only a semipolish. I wanted the viewer to see movement, but not brilliance. Now, here's the problem. How to attach them into their sockets without using glue on the facets? The glue would destroy any effect the semipolished facets would have. The eyes needed pupils, but the dome shape would magnify, so what had to be done for the pupil had to be very small and black. A small, thin cut was made, taking away the faceted points at the backs of the Apatites, and a very thin sliver of Wyoming black jade was cut. The length of the sliver had to be just right. The eye sockets were drilled through the head. The sliver of black jade was epoxied into the slit of one Apatite. When cured, it was inserted through the head to be epoxied into the other Apatite. The slit had to be vertical, and the eyes couldn't wobble around. The arrangement was held in place with masking tape until cured. When the tape was taken off, the effect was pretty good. As the piece was slowly rotated, the eye did indeed appear to move.

It was a very nice challenge, and the lady liked it!